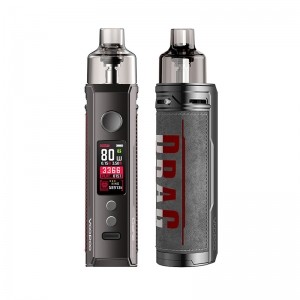 Voopoo is rocking the pod mod waters once again, with  new installment in the DRAG line of successful vape mods. The DRAG X is a pod-style AIO that take the same PnP coils as the Vinci line and, in many ways, seem to be direct successors to the Vinci and the Vinci X respectively.
The device is equipped with the GENE-TT chipset, take 4.5 mL pods, and charge through a USB Type-C port. Drag X takes an 18650—which makes it feel more like a mod, especially since a 510 adapter is in the works according to Voopoo.
I usually need around two weeks of daily use before I start working on a review, but for this device I had to make an exception. I’ve been using Drag X non-stop for a week and it’s already my go-to setup for DL vaping. Keep reading to find out what impressed me about the DRAG X 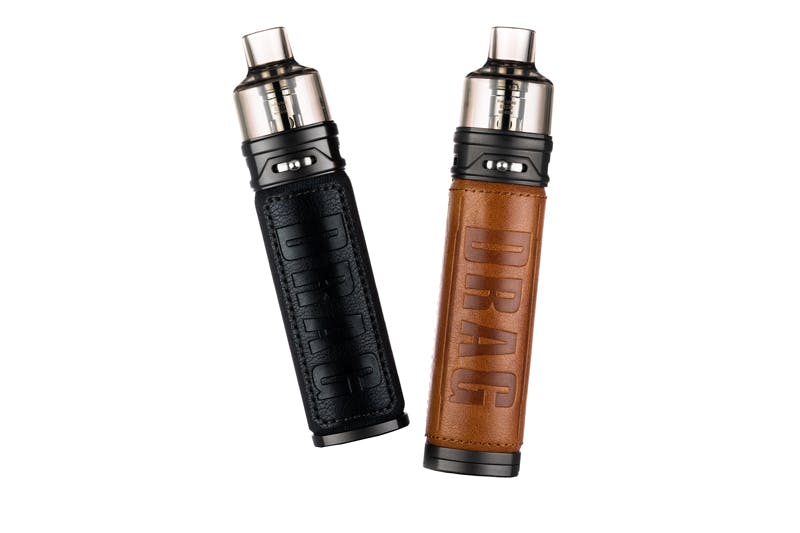 Let’s start with aesthetics: Drag X is stunning! I received the Mashup and Retro editions, and I honestly can’t even find one thing to fault them from a design perspective. From the leather textures and details, to the fabric texture of the “mashup” edition and its original Aegis vibes, the DRAG X is one of the best looking and most well-built devices I have held in a long time. I’m not 100% sure that Voopoo uses real leather on them, but it sure looks realistic to me.

Maybe some won’t love the large DRAG branding up front, but it blends better than it does on the mods. And after all, that’s one of the things the DRAG line is known for. The screen is large, colorful, and bright and wattage is visible even under direct sunlight. The transparent PCTG material used on the pods is a great fit for the mod and kinda looks like one of those sexy aftermarket transparent RDA caps. Seriously, even the airflow adjustment system looks awesome—and unlike the Vincis, the airflow is fully adjustable on the DRAGs.

The pods come with a much better plug than the flimsy one that came with the Vinci pods, and the magnets are super strong. Plus, the built-in mouthpiece is rounded this time around, and feels just like one of these large 510s made for DL vaping. All in all, the DRAGs pass the build quality and design test with flying colors. 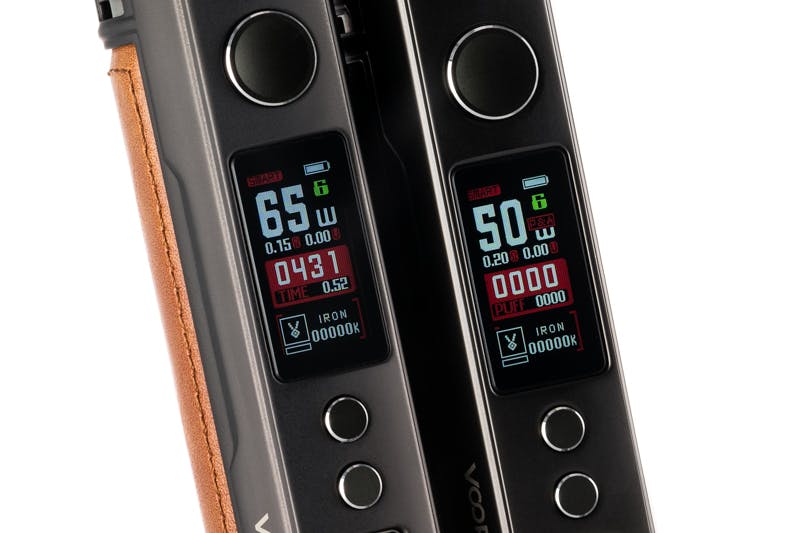 The GENE.TT chipset feels like an updated GENE.AI chip with one main addition. There’s a score ranking mode taking up around half of the screen, which calculates some type of a score every time you take a puff and adds it to a cumulative score. It seems to be granting you some medals depending on your level or something along these lines. Bottom line is, well, that the score mode is useless in my opinion.

Other than that, you get your wattage, voltage, resistance, and a battery meter on the screen. Operations are fairly straightforward.

Excluding the scoring mode, which doesn’t allow any interaction anyway, the rest is very similar to the Vinci line. The puff counter shows the number of puffs for the last 14 days and all key combos are basically the same. And similar to the Vincis, Drag X will go to standby mode if left unused for a while, and you will need to press fire to wake them up. Fortunately, it takes 30 minutes to enter standby mode for the DRAGs, so that shouldn’t be an issue too often. 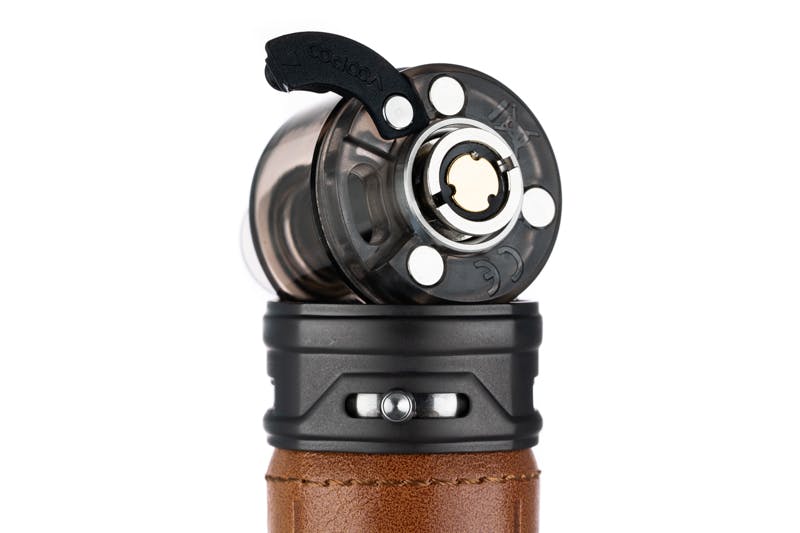 The pods are bottom-filled, and the filling port is large enough to use even with droppers. To replace the coil, all you need to do is pull the old one out and push the new one in. The Device will auto-set the wattage once the pod is in place.

Finally, Drag X is firmware updateable but note that according to Voopoo, “the side of Type-C data line marked with a triangle shall face downwards”. 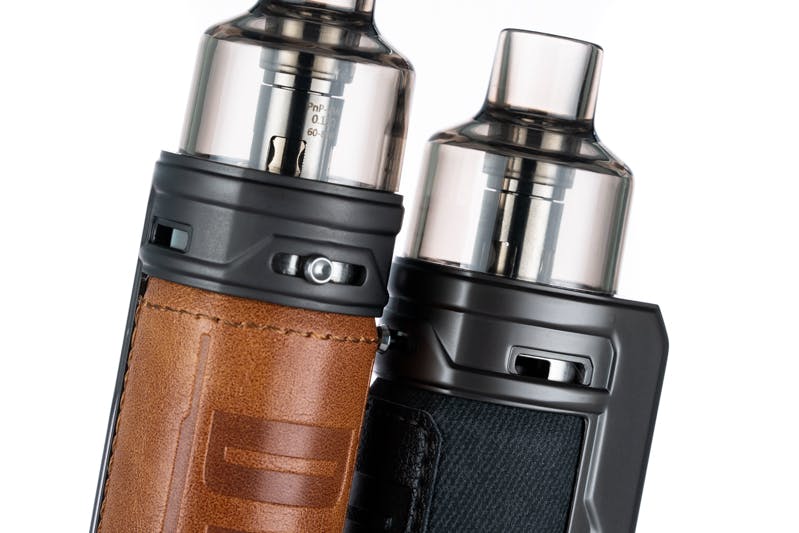 Drag X comes with a 0.3-ohm coil and a 0.15-ohm mesh coil rated for 60-80 watts. These new coils have an interesting design, with the wick holes being significantly cut down—in fact, I wasn’t sure that the holes are exposed enough to allow proper wicking. I tested both coils with 70/30 and 80/20 3 mg juices and found that they kept up without a struggle.

The 0.15-ohm coil produces excellent flavor and impressive clouds at 60-65 watts with the airflow around ¾ open. I strongly recommend only using 25-amp batteries like the VTC5As, and not going over 70 watts when using this coil. I actually don’t see any reason to even go over 65 watts, as it performs impressively at that wattage. The only downside of this coil is that it may heat up the mouthpiece at times, especially when chain vaping on it. This was more of an issue with a fresh coil, and it is a small price to pay for a coil that performs at such a high level. 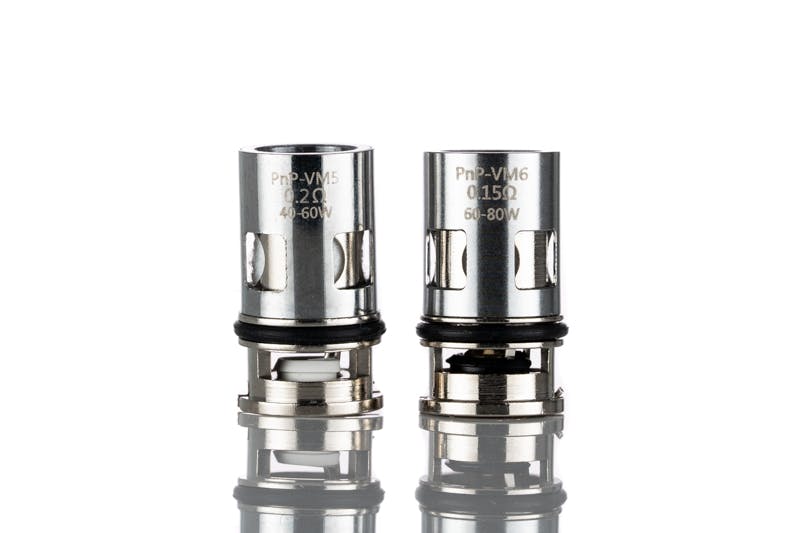 I don’t know how they managed to do that, but I don’t think I’ve seen the contacts of a pod mod being so dry before. Some barely visible droplets and that’s about it! As for coil life, I have been trying both of these at the same time and I can’t give you a specific number (I lost count!). But I can ensure you that they are lasting for long, as I have filled the pods at least five times each (probably closer to seven times) and while they look black enough to warrant replacement, they are still vaping just fine.

Finally, Voopoo says that a 510 adapter is coming, which will allow the X to be used with your own tanks. A 24 mm sub ohm tank would be a perfect fit on top of these mods, and I’d also really love to use them with an MTL tank for the added battery life.

Battery life on the DRAG X will obviously be dependent on your 18650, but I got around one and a half pod with my VTC5A using it at 60-65 watts.

The device charges through USB Type-C ports, and does not support pass-thru. Not a big issue for me, especially considering how fast I can get a full charge. 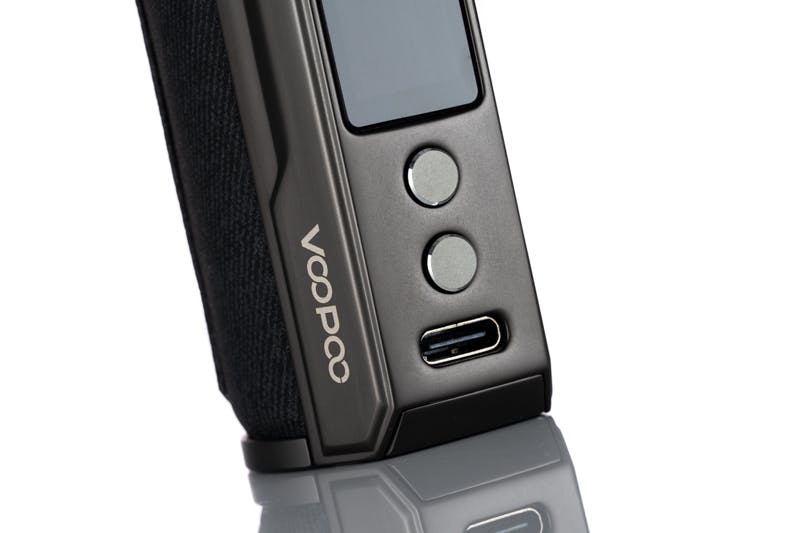 As a side note, the DRAG X keeps the puffs on the counter when removing the battery, which is great, but it erases the time—which can be pretty annoying because it asks you to re-set it every time. It’s just one prolonged click of the fire button to exit the time setting menu, so if you don’t mind using a watch or your phone for the time, it’s not a big deal. Hopefully they can fix that with a firmware update.

Outside of the minor time setting inconvenience, the only thing I’d change here is that I’d remove this weird puff score feature and use the screen space for something useful. From a build quality and design perspective, the DRAG pod mod line excels. The Vincis were already great devices, but the DRAGs are better in every perspective. The new coils are rocking, full airflow adjustability is great, and overall aesthetics and build quality make the DRAG X my favorite pod mod on the market right now.

All in all, that’s an impressive product line, and I can easily recommend it to anyone looking for a semi-portable direct-lung or MTL setup.